Approximately one in every 1,500 people in Ireland (32 counties) have done at least a basic week in Reality Therapy. This is a remarkable spread of ideas since the introduction of Reality Therapy here in 1985.

It was in Cincinnati that Cork man Sean O’Dwyer made the first planned moves that would bring RT to Ireland. He had become certified in Reality Therapy in the USA and decided that it could meet Irish needs at home. He wrote to Dr. Glasser and promptly received his full approval. Sean then approached several Irish organisations most of whom did not show much initial interest. He persevered and eventually Arthur Dunne, Chairperson of the Institute of Guidance Counsellors, took up the invitation to introduce Reality Therapy to the members. 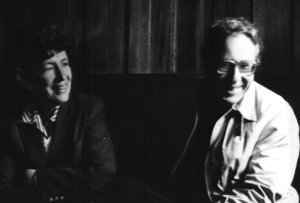 During one of Sean’s holiday trips home, he and Arthur met in Dublin and their planning session led directly to Dr. Glasser’s first visit in 1985 together with his wife Naomi. He gave an introductory day on Reality Therapy and its then new basis in Control Theory (CT). A group of those present decided to do a follow-up basic week taught by Dr Glasser himself.

On his return to the USA, Dr. Glasser followed up on our interest by inviting senior faculty member Suzy Hallock to take charge of further training in Ireland. She has been a wonderful catalyst in this process and her ability to understand a totally different and complex culture has been central to her successful work here. Irish attitudes to life, to time and to social interaction differ considerably from what she was used to in Vermont but she learned quickly.

The Appeal of Reality Therapy

At a professional level, RT’s pragmatic simplicity, its powerful effectiveness and profound respect for the individual had an immediate appeal for Irish counsellors. The language of RT had a warm human directness rather than a remote academic aura. In practice it was a down-to-earth no-nonsense approach. There was no attempt to be eccentric or mystical. All of this had a strong appeal to people interested primarily in effective and efficient ways of helping others. The dual relevance of RT/CT to counselling and education enhanced its value to its first Irish trainees.

In addition, the training structures suited the Irish group’s working life-style very well with intensive courses in summer and part-time study through the winter. The initiative of Sean and Arthur, the generosity of Dr. Glasser and Suzy Hallock, the relevance of RT/CT to Irish needs, the competence of the Institute of Guidance Counsellors and finally the creation of our own organisation were all key components in RT’s taking such firm root in Ireland. Since 1987 another American Instructor, Dick Pulk, became a regular teacher in Ireland and we have been greatly enriched by his work here.

In acknowledgement of William Glasser’s contribution to Guidance and Counselling here, the Institute of Guidance Counsellors awarded him an Honorary Fellowship in 1990, the year that celebrated the 25th anniversary of the publication of “Reality Therapy”, the book.

The Institute for Reality Therapy in Ireland (IRTI)

Each and every member of this committee had a heavy professional work load but such was their enthusiasm about RT that they have all given a lot of time and good work to its development in Ireland.

As a group the IRTI committee has clarified a wide range of administrative matters: committee roles, dates and venues for courses, trainers, PR literature, a Newsletter, Training Information Bulletin, Publications list, Ireland Fund Proposals, practicum supervisor training, Intensive Week Instructor training, fee structures, IRTI membership structures, code of ethics, talks, workshops and courses. In each year of our existence we have chosen one or two areas to develop attending at the same time to ongoing priorities. All of this is a tribute to the teamwork and remarkable generosity that has characterised the IRTI committee.

A very important development here has been the growth of the regional branch system. Small groups of certified people had been meeting with increasing regularity around the country and the clustering of these first sessions in Dublin, Cork and Waterford led to the first three branches in these key cities. There was a big boost to further growth when the members at their Annual General Meeting voted that IRTI membership should require a minimum of ten hours professional development per year. With this in mind, branches in Dublin, Cork, Waterford and Galway aimed to have at least five two-hour meetings per year.

There are several advantages to having this branch structure: members keep in contact with RT/CT colleagues in their localities, professional development is ongoing, referral lists can be provided on a local basis and, after the International Convention of 1994, our own annual national convention will be hosted by each region in turn. The IRTI committee acted as a central co-ordinating body mainly for courses since the branches practically run themselves.

In 1997 the members decided to change the name of IRTI to “The William Glasser Institute Ireland” in line with a similar change of name in the parent institute. Work also began on our first constitution. In May 1997 at a special conference in Dublin attended by Dr Glasser the Quality School movement was launched in Ireland.

March 1998 opened up a new chapter in the history of WGII with the setting up of an official office. This was based in Malahide Co. Dublin and managed our official telphone number and postal address. The office later moved to Mornington, Co. Meath.

It was mainly Irish Guidance Counsellors who first trained in Reality Therapy in Ireland. Initially growth had been slow but, as soon as we had our own Irish instructors in 1990, the number of people doing basic weeks rose to around 150 per year and has stabilised at this level.

In RT’s first years of growth here we have seen a wide variety of careers represented on the courses: social workers, probation officers, secretaries, teachers, nurses, housewives, nuns, priests, doctors, principals and others.

About one half of those doing basic weeks continue to advanced level with about one third of the original numbers reaching certification.

The biggest groups among those doing basic weeks have tended to be teachers, guidance counsellors and nurses, in that order. Coming close behind these groups are people working in addictions and employment work.

Members of the William Glasser Institute Ireland have contributed to courses in England, Spain, USA and Colombia. Among our trainees we have had Irish, Spanish, English, Scottish, Austrian, American, African, and Canadian participants.

One big event in the history of the William Glasser Institute Ireland was the International Convention of 1994. Naomi Glasser encouraged us greatly, Bob and Sandie Wubbolding shared their experience and expertise and finally Terry Hoglund guided us to a very successful conference. We were especially delighted when the President of Ireland, Mrs Mary Robinson, agreed to open the event for us and delivered an excellent address to the delegates.

We had colleagues and their families from (in alphabetical order) Australia, Austria, Canada, Croatia, England, Ireland, Norway, Japan, Korea, Slovenia, Spain and the USA. As the first RT Convention outside of North America, this was a truly international event. As the convention motto, the adoption of an old Irish proverb “Ní neart go cur le chéile”, “Together we are strong” reflected the spirit of the convention, of the Institute itself and, indeed, of our work with clients.

In July 2005 it was decided to hold the Third European Reality Therapy Convention in Dublin. The WGI kindly agreed to have no International Convention that year so that participants from around the world could join in this big European event. The convention was opened by Tim O’Malley T.D., Minister of State at the Department of Health and Children in the Government of the Republic of Ireland. He was most supportive of Dr. Glasser’s challenge to the traditional notion of mental illness.

In 2009 The William Glasser Institute Ireland became a company limited by guarantee. This important step in our development was carried out under the leadership of Sr. Basil Gaffney and the National Executive.